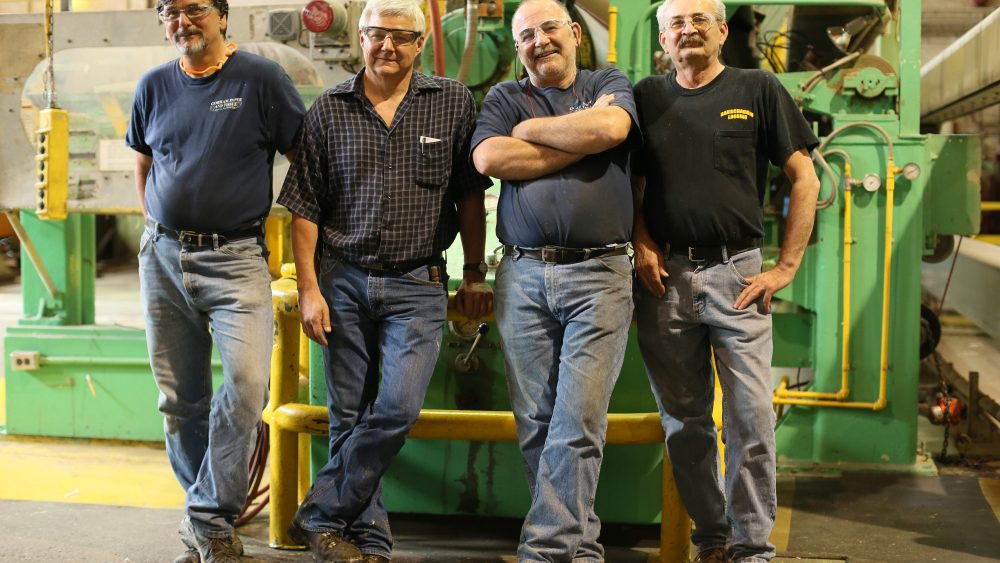 It’s Not Easy Being Blue

At some point during our transition from manufacturing economy to financial service market, we set a taint on being blue; blue collar, that is. The foundation of our great nation has been built upon three basic building blocks: democracy, capitalism and industry. Those who worked on the manufacturing lines of our industrial companies demonstrated enormous pride in all three. With the loss of one, sadly, looms the threat to all.

In his inaugural address, President Obama poetically and prophetically addressed the import of manufacturing to this renowned country. In his words:

“It has not been the path for the faint-hearted, for those who prefer leisure over work, or seek only the pleasures of riches and fame. Rather, it has been the risk-takers, the doers, the makers of things — some celebrated, but more often men and women obscure in their labor —who have carried us up the long, rugged path towards prosperity and freedom.”
– President Obama’s Inaugural Address

But shortly after taking office, the President disregarded the promise of his words: the need to develop incentives, programs and responsibility to promote the renaissance of U.S. Manufacturing. The new administration had the opportunity to set priorities, humble the nation and inspire a patriotic rebuild of America. However, in the panic of crisis, the government chose the path of least resistance. It reached again for the magic switch of fiscal and monetary policies, choosing to save the banks through cash, guarantees and programs. The Fed flooded the markets with the hope that it could slow the rapid plunge of GDP prior to a systemic collapse. But once disaster was averted, there was never a change in principle to address job creation through a focus on industry – to rebuild the economy bottom up with a sound foundation to withstand the next decline. Instead, the need for direct lending to small and mid-sized companies has been wholly ignored with more manufacturers liquidating daily. Such action, or rather inaction, should make us wonder whether we have lost our collective will to be the maker of things. We have taken a national stance of arrogance, founded in a belief that we should evolve beyond blue collar employment to service jobs that bring us closer to the godliness of Wall Street.

Over the last decade, on a seasonally unadjusted basis, we have lost 6.4 million manufacturing jobs, from a high of 17.4 million down to approximately 11 million. Since peak employment in 2000, when annual car production stood at 17 million, automotive and supplier service has fallen by 50%. With the start of this recent recession, 2 million manufacturing jobs have disappeared, almost one in every four total employment opportunities lost. Recovery in the manufacturing sector is expected to be very slow – most jobs lost will never again be available due to closures and transfers overseas. Liquidation brings the loss of technology, tribal knowledge and the impossible task of restarting production.

In her recent article, Why Wall Street’s Gain Has Been America’s Loss, Arianna Huffington explains that manufacturing jobs have

“traditionally delivered American families into the middle class and kept them there. There have been a number of recessions over the last few decades. And our economy bounced back in a way that made it harder for those in the middle class to stay there — and even harder for those aspiring to become middle class to get there. The loss of middle class jobs is rarely talked about in Washington. Neither is the way this useful section of our economy is being replaced by the useless section of our economy.”
This week, former Federal Reserve Chairman Paul Volcker said the “U.S. economy faces a long slog as the nation struggles to reduce the jobless rate from close to a 26 year high…,” and he recommended “the U.S. economy shift from a reliance on consumer and government spending to a greater emphasis on investments and exports as it recovers.”

Our ability to sell overseas, however, is deeply dependent on that which we make and manufacture. I remain indelibly confused by the administration’s push for greater exports while we systematically reduce emphasis on our need for industry.

At some point in our recent history, we lost our faith in the American Dream – or, at very least, significantly altered our definition. From the shop floor to the C Suite, “Made in America” has always spoken to the satisfaction of active participation in a hands-on, productive economy. With the loss of opportunity to earn a living with dignity and to take pride in heavy lifting, we could inadvertently raise a populace of permanently unemployed Americans more comfortable with programs of entitlements than with continued rejection and dejection.

This country has long been a meritocracy founded upon education and work ethic, a nation in which each one of us could overcome the circumstance of birth to live the American Dream. This is not a time in our nation’s history for panic, self-pity, entitlement or complacency; it is a time for discipline, hard work and cooperation. Call me naïve, but I believe that faced with the ugly truth, we will roll up our sleeves, raise ploughshares and stand together to rebuild America.