Media
Patriarch Partners / Articles / It Could Happen to You: A Story of SEC Overreach
Dec 13 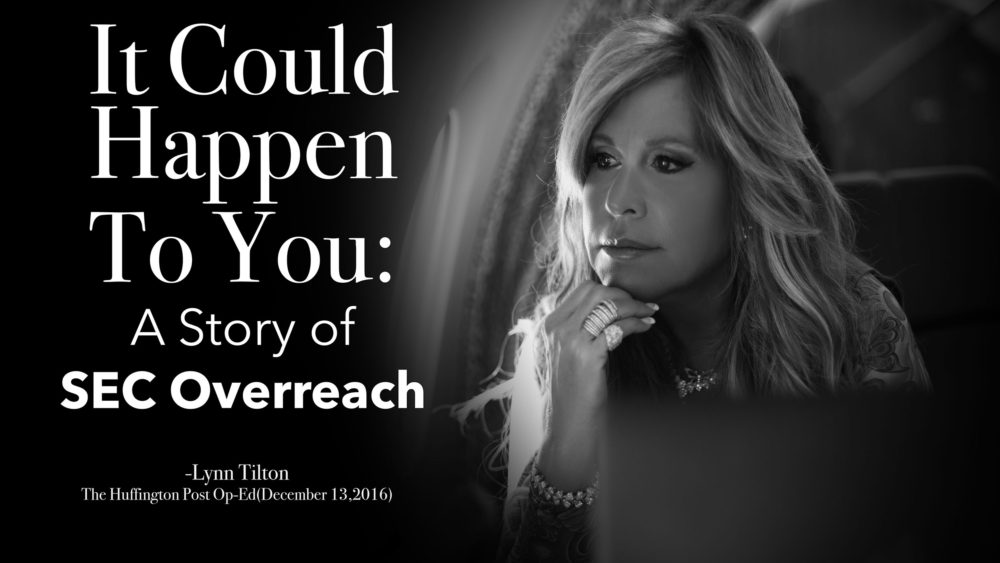 It Could Happen to You: A Story of SEC Overreach

This morning, The Huffington Post published an Op-Ed by Ms. Tilton titled, “It Could Happen to You: A Story of SEC Overreach”, which provides the reader with context, chronology and caution with regards to the agency’s baseless claims against her.

Full text and link to the article are below.

It Could Happen To You: A Story of SEC Overreach

I know how it feels to be falsely accused. I know how it feels to be pursued for seven years by an overzealous government agency determined — no matter how the facts cut against them — to pursue unfounded charges. I know because it happened to me. And that is why I am fighting back to clear my good name, to expose overreaching SEC regulators, and to spare others the nightmare of my experience.

In 2000, I pioneered the field of investment grade distressed debt collateralized loan obligations (CLOs). I invested in distressed companies, often those left to liquidate or emerging from bankruptcy, and repackaged their debt into CLO products purchased by Wall Street’s most sophisticated institutional investors. Through active management of these distressed loan portfolios, I restructured and infused value into failing companies and generated large returns for me and my investors. My family office and the investment vehicles allowed me to acquire and rebuild iconic American companies, primarily manufacturing companies, saving hundreds of thousands of jobs across America’s rust belt.

After the success of my first funds, the Arks, I launched a new set of distressed debt funds called the Zohars. My “own to loan” strategy for the Zohar funds was simple but innovative: I would invest my own money in the equity of distressed companies, manage the companies through my board roles (as well as oftentimes acting as their CEO), and provide the companies with liquidity through loans and flexible repayment terms, usually as their sole lender. The Zohar funds were designed so that I could exercise my discretion and my reasonable business judgment to actively manage these companies and their capital structures so that, with time, the companies could become successes again.

Everyone understood this model, including the noteholders, ratings agencies, and the trustee—all sophisticated financial institutions. Everyone knew that distressed companies could not always pay all of their interest, on time, each month. Everyone understood the deal was designed specifically to give me the authority and discretion to amend and extend loans and to defer the companies’ interest payments to enable them the time and liquidity they needed to recover.

Unfortunately, though, the SEC seems unwilling or incapable of understanding the business model. Even though there was no actual evidence of wrongdoing, the SEC went ahead and brought charges, claiming that my firm was not entitled to management fees where the companies were not able to pay full interest. Tellingly, the vote among the SEC Commissioners to approve the charges was 3-2, the slimmest of margins and split across political party lines.

Betraying its lack of confidence in the merits of its case, the SEC steered the litigation to its own in-house system, overseen by administrative law judges appointed and employed by the SEC. In the SEC’s internal tribunals, the accused face harsh, quasi-criminal sanctions, like lifetime industry bars and disgorgement, yet they do not receive the due process rights afforded in federal courts, like basic discovery and the right to a trial by jury. Moreover, the cases proceed on a lightning fast schedule, to the unfair advantage of the SEC (which has the benefit of conducting multi-year investigations). Not surprisingly, the SEC’s win rate of 90 percent in its home court tribunals is much higher than in federal courts. For all these reasons, I went to federal court to have the SEC administrative process declared unconstitutional; trial by ambush is inherently unfair. But federal courts determined I had to first exhaust the SEC administrative process before raising my constitutional challenges. So that’s what I have done.

Over the past month, the SEC was put to its proof and came up empty at trial. The SEC called only three noteholder witnesses. All of them admitted that they understood the design of the deal and the discretion that it afforded me. Moreover, they testified that, from reports they regularly received, they had all the information necessary to enable them to see that some companies had not paid full interest every month and also to see the basis on which the trustee authorized the payment of fees. The SEC knew these facts before the trial began but refused to recognize the truth because it did not support its agenda. Documents at trial also revealed investor witnesses were privately making sexist comments about me in internal emails—an unfortunate reality for a successful woman in the still male-dominated finance world.

The SEC is seeking to have me disgorge more than $200 million in management fees. But the reports to the noteholders were transparent, and the SEC, which has the burden of proof, never even dared to call the trustee to the stand—doubtless because the trustee had, of course, acted properly in disbursing the fees.

Exposing the absurdity of the SEC’s position, the proof at trial showed that I have put more than $440 million of my own money back into the funds and companies to protect noteholders and support the companies, and have deferred more than $60 million in fees still owing to me. During the financial crisis, I deferred taking some of the fees to which my firm was entitled for almost four years.

Equally troubling, the SEC’s lawyers have engaged in egregious misconduct throughout this case, apparently blinded by their single-minded obsession with winning my case. The SEC’s lawyers repeatedly failed to honor their most basic disclosure obligations and proffered multiple witnesses they compromised through side deals, including the sharing of my confidential information with MBIA, the insurer of the notes and a longtime litigation adversary, to use in commercial litigation against me and hiring my accounting firm to give testimony elsewhere. Thus far, these transgressions have gone unremedied and considered irrelevant in the SEC’s tribunal system.

The SEC has no case, plain and simple. But for the past seven years, its lawyers have dragged me through the mud and tarnished my reputation. They have misunderstood me and my business and, in their pursuit, refused to acknowledge the truth. I now await the verdict of the SEC’s administrative law judge. It is a comfort to me that anyone who sat in the courtroom knows that I was vindicated at trial and proven to have done nothing wrong. So now we will see whether justice can prevail in the SEC’s administrative system. No matter what happens there, however, I will continue to fight for justice—not just for me, but for everyone wrongly targeted by overreaching SEC regulators.